This is the story of a Pakistani Scientist, who is an Electrical Engineer from NED and a PHD from Florida Institute of
Technology. NASA was getting ready to launch a very important space shuttle. The scientists and engineers checked and double checked everything to make sure that things are fine.
However, on the day of its launch, something seemed to be wrong. The
rocket gave all sorts of noise but never took off even an inch from the ground. The engineers were puzzled because they could not figure out the
problem. Finally, there was a Pakistani scientist (the one who is mentioned above) he offered the help. NASA people were desperate by that time and agreed
to do anything. ""Tilt the rocket 45 degrees to the right"" said the Pakistani scientist. The engineers were puzzled but did it anyway. ""Bring it back to vertical
position"" the Pakistani said. The engineers did so . ""Now start the engines"" he said.
And surprise, the rocket took off and flew into outer space!

Everybody congratulated him and asked him how he knew what to do.
He replied - ""It-s very simple. This is what we always do with our CD 70
motor bike in
Pakistan.""
Advertisement
· 1 Like · Apr 17, 2007 at 02:04
Category: uncategorized Tags: Pakistan 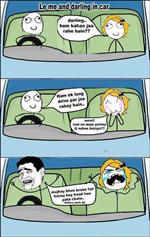